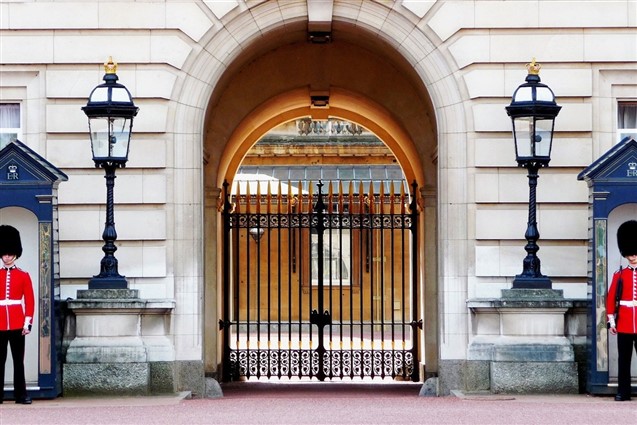 Enjoy the magnificent state rooms of Buckingham Palace. The special exhibition for 2016 is "Fashioning a Reign" 90 years of Style from the Queen's Wardrobe.

The term ‘State Rooms’ is applied to those rooms that were designed and built as the public rooms of the Palace, in which monarchs receive, reward and entertain their subjects and visiting dignitaries. Today the State Rooms at Buckingham Palace are used extensively by The Queen and members of the Royal Family to receive and entertain their guests on State, ceremonial and official occasions.   The Palace's nineteen State Rooms predominantly reflect the taste George IV (r.1820-30), who commissioned the architect John Nash to transform what had previously been known as Buckingham House into a grand palace. Many of the pieces of furniture, sparkling chandeliers, candelabra and other works of art in these rooms were bought or made for Carlton House, George IV's London home when he was Prince of Wales. Today the State Rooms are furnished with many of the greatest treasures from the Royal Collection, including paintings by Van Dyck and Canaletto, sculpture by Canova, exquisite pieces of Sèvres porcelain, and some of the finest English and French furniture in the world.   Many of the other State Rooms also have particular uses today. It is in the Throne Room, for example, that The Queen, on very special occasions like Jubilees, receives loyal addresses. On 29 April 2011 this room was the setting for the formal photographs following the wedding of The Duke and Duchess of Cambridge. In the Music Room, guests are presented to The Queen, The Duke of Edinburgh and the visiting Head of State on the occasion of a State visit. The White Drawing Room, perhaps the grandest of all the State Rooms, serves as a royal reception room for The Queen and members of the Royal Family to gather before official occasions.   Special Exhibition: In celebration of The Queen's historic Platinum Jubilee in 2022, The State Rooms at Buckingham Palace will feature a display looking at The Queen's Accession to the throne in February 1952.   On display will be examples from the remarkable series of portraits taken by Dorothy Wilding, that formed the basis of The Queen's image on stamps and in British embassies across the world until 1971. Also featured will be The Girls of Great Britain and Ireland Tiara, which was a wedding gift to Princess Victoria Mary of Teck, later Queen Mary, on the occasion of her marriage to the future King George V in 1893. The diamond tiara was made by E. Wolff & Co for R & S. Garrard in a scrolled and pierced foliate form. Queen Mary gave the tiara to her granddaughter, Princess Elizabeth, as a wedding present on the occasion of her marriage to Prince Philip on 20 November 1947      Sunday 31 July 2022 Pick ups: Route A2   Saturday 27 August 2022 Pick ups: Route B2   Adult           £49 Child 4-14  £37   Price includes: Entrance to Buckingham Palace with audio guide Return coach travel
CHECK AVAILABILITY AND BOOK