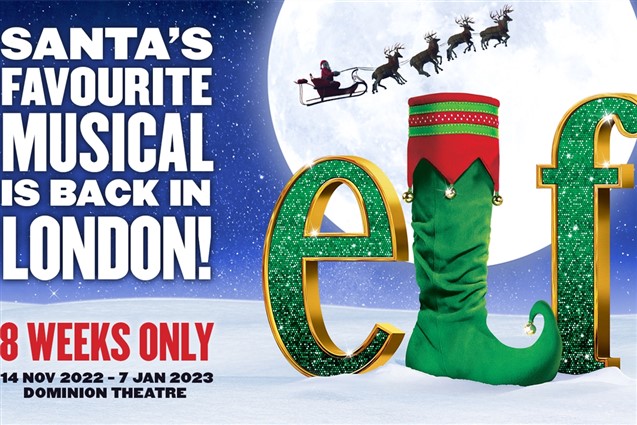 ELF - the smash hit Christmas musical based on the beloved film - returns to London for a strictly limited 8-week season at the Dominion Theatre.

SANTA’S FAVOURITE MUSICAL IS BACK IN LONDON!   ELF – the smash hit Christmas musical based on the beloved film – returns to London for a strictly limited 8-week season at the Dominion Theatre from 14 November to 7 January.   ELF is the funny and charming tale of Buddy, who mistakenly crawled into Santa’s bag as a baby and was raised as an elf! Way too tall and not so great at his job, Buddy is the North Pole’s biggest misfit… and knows he’ll never belong. When Santa tells him the truth, Buddy heads to New York to find his birth father (who turns out to be quite high on the Naughty List). After causing some merry mayhem in Manhattan, Buddy finally discovers the gift of family and falls in love. And when Santa’s sleigh crashes in Central Park, it’s Buddy who finds a way to save Christmas forever!   “This is truly, the Christmas cake of musicals” – The Times   Thursday 5 January 2023 Pick ups: Route C   £75 per person   Price includes: Theatre Ticket Return Coach Travel
CHECK AVAILABILITY AND BOOK