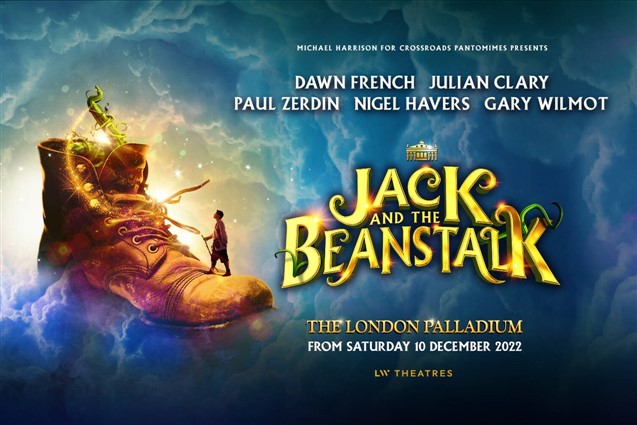 Fee-Fi-Fo-Fum A GIANT panto comes to The London Palladium!

Fee-Fi-Fo-Fum A GIANT panto comes to The London Palladium!   This Christmas join comedy superstars Dawn French and Julian Clary as they lead the cast of a brand-new production of Jack and the Beanstalk at London’s iconic home of pantomime!   The West End’s panto will feature returning Palladium favourites Paul Zerdin, Nigel Havers and Gary Wilmot, along with a lavish set and beautiful costumes designed especially for London’s biggest panto.   With more star casting to be announced later in the year – this is the panto you’ve bean waiting for!   Friday 16 December 2022 Pick ups: Trumpington, Royston & Baldock   Wednesday 11 January 2021 Pick ups: Route B2   £75 per person   Price includes: Theatre Ticket Return Coach Travel   Please note the London Palladium is on a street inaccessible by coach and therefore a short walk will be required from the coach to the venue.   Please note we cannot be liable for the non-appearance of any member of the cast for any reason
CHECK AVAILABILITY AND BOOK