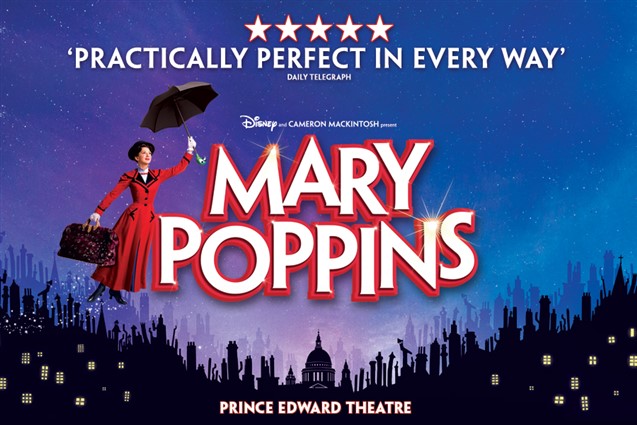 Get your spoonful of sugar at the ready, as Mary Poppins returns to the West End.

Get your spoonful of sugar at the ready, as Mary Poppins returns to the West End. Flying back into the Prince Edward Theatre, step in time to musical theatre classics such as “Supercalifragilisticexpialidocious” and “Let’s Go Fly a Kite”. Telling the story of magical nanny Mary Poppins and cockney charmer Bert, it’s a family-friendly show that’s practically perfect in every way.   Set in Edwardian London, Mary Poppins arrives onto Cherry Tree Lane with a hand-written advertisement for a nanny from Jane and Michael Banks. Teaching moral lessons inside and outside of the house, the trio meet jolly jack-of-all-trades Bert.   The foursome have plenty of fun adventures, bringing their surroundings to life. But, when Mary leaves with hope the children can grow without her, life on Cherry Tree Lane changes. Wishing for Mary back won’t be easy, but Mary and her umbrella are a truly unforgettable pair that won’t be gone in a hurry.   Zizi Strallen reprises her role as Mary Poppins, after performing the title role on the UK tour. She becomes the second Strallen sister to play Mary Poppins on the West End, after Scarlett Strallen. Strallen has recently played Young Phyllis in Follies at the National Theatre and Fran in the West End premiere of Strictly Ballroom at the Piccadilly Theatre.   Charlie Stemp returns to the West End after playing Arthur Kipps in the recent revival of Half a Sixpence at the Noël Coward Theatre, where he was nominated for best actor in a musical at the 2017 Olivier Awards. More recently, he played the role of Barnaby Tucker in Hello Dolly!  on Broadway.     Thursday 15 September 2022 Pick ups: Route C   £78.00 per person   Price includes: Stalls Theatre Ticket Return Coach Travel
CHECK AVAILABILITY AND BOOK